It’s possible that this recipe could go undetected as vegan by Dorcas Reilly herself. Yep, Dorcas Reilly is the name of the woman responsible for the legendary “Green Bean Bake” that has been synonymous with Thanksgiving tradition for decades. Dorcas created the dish for Campbell’s back in 1955.

People go full-Gremlin on this casserole. Thank you, Dorcas. Apparently, Dorcas was persistent in advocating for her green bean casserole when it did not test well with Campbell Soup Company. She knew it was genius.

When I’m making this I buy two containers of the French’s Crispy Fried Onions, because they get snacked on, hard. I’d say they are crack-like, but I haven’t actually tried crack. These crispy little bastards have everything we are hard-wired to seek for survival and our brains get a little happy when we have them.

To make this green bean casserole you make a vegan creamy mushroom soup in a pot with fresh green beans. I use this mushroom broth, please check your ingredients because sometimes mushroom bases and broths contain dairy.

This is a recipe that you can make ahead. After you’ve poured the soup and green bean mixture into the casserole dish, you cover it and put it into the fridge. Do not add the crispy onions until after baking it. 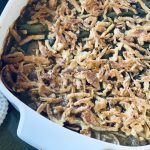 Nutrition information is approximate. Make Ahead Put the soup and green bean mixture in the casserole dish and leave it in the fridge until you are bake and serve. Do not add the French’s onion when storing in the fridge. You will sprinkle the French’s onions on top after baking 20 – 30 minutes at 350° (until hot and bubbly). After sprinkling the French’s fried onions on top, put the casserole back in the oven and bake until the French’s onions have a little more color, you can turn up the heat, or broil, but they cook quickly so you it’s important to watch them.  If you make this with canned green beans, drain them and add them to the pot at the end right before transferring to the casserole dish. The beans will be a lot softer.  www.planttestkitchen.com

For your shopping convenience, this post contains affiliate links.

Did you make this Vegan Green Bean Casserole? How’d it go? Tell me about it in the comments section below. 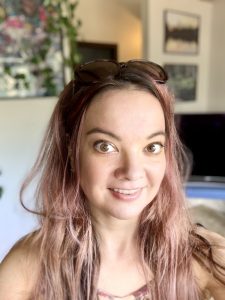